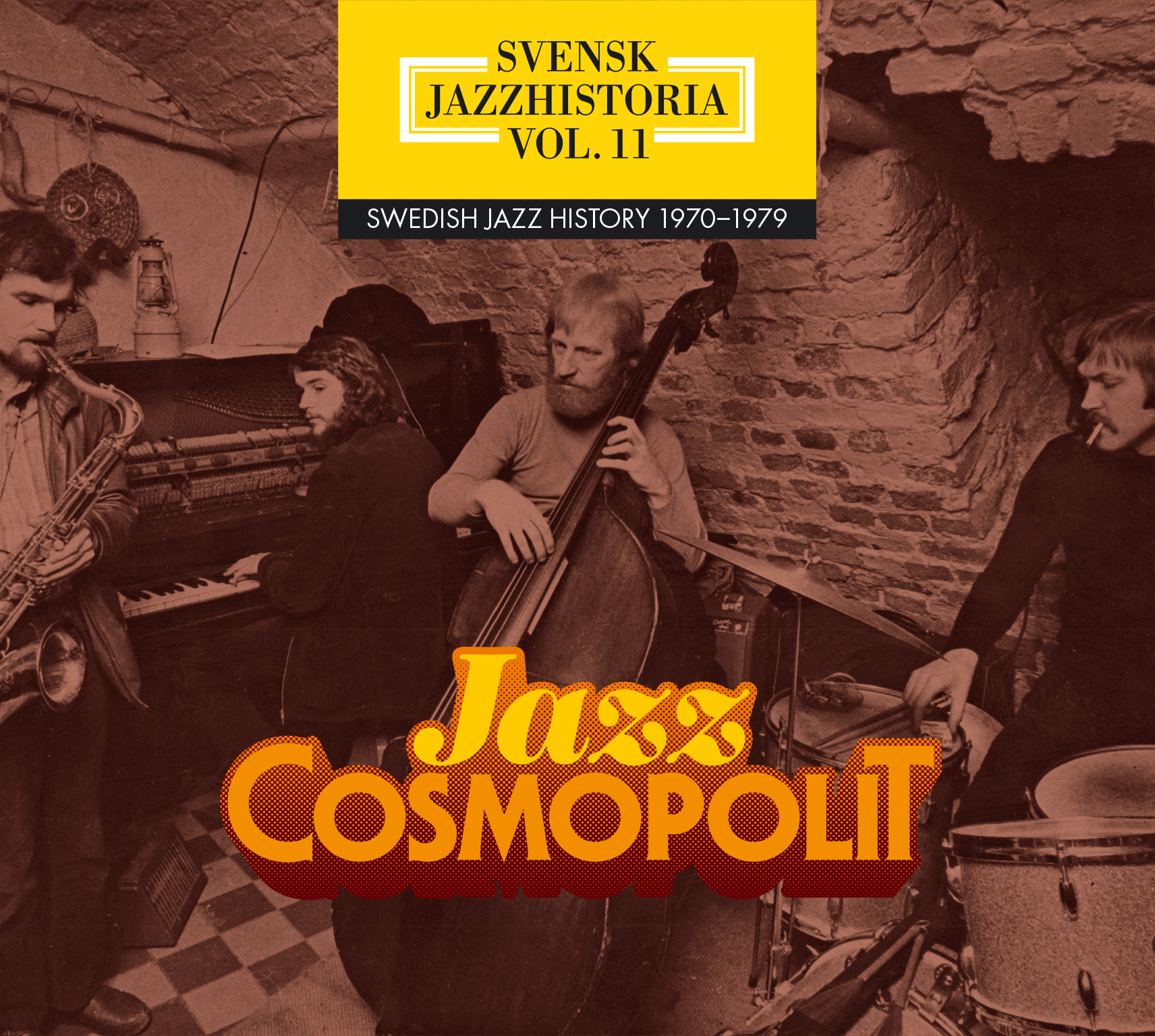 Svensk jazzhistoria (Swedish Jazz History) is a unique series about the evolution of jazz in Sweden, published by Caprice Records. While the first ten volumes reflect the years between 1899 and 1969, this red-hot eleventh instalment delves deep into the 1970’s. On four CDs with a total of 62 tracks, and a book on 188 pages, we summarize a vigorous, explosive, and many-sided decade of Swedish jazz.

The book includes an international envisagement of the jazz of 1970’s Sweden, written by British author and journalist Stuart Nicholson, and deep drawing interviews with two of the decade’s central figures, Monica Dominique and Lennart Åberg. Included is also an article about women’s representation on the 1970’s Swedish jazz scene, as well as a chronicle on the most important jazz events.

The book also contains a large selection of photographs, from many of the greatest Swedish jazz photographer, like Christer Landergren and Gunnar Holmberg.

Just like with the preceding ten volumes, Svensk jazzhistoria vol. 11 is the masterstroke of “jazz archeologist” Jan Bruér. Assisting him this time, is Viveka Hellström and Jörgen Adolfsson, both research assistants at the Swedish Centre for Folk Music and Jazz Research (Svenskt Visarkiv). All three of them describe the 1970’s as a decade characterized by a large breadth of styles, and many new inspirations.

– The 1970’s was a musically rich decade, where older forms of jazz coexisted, side by side, with new shapes that garnered inspirations from both the American and European avant-garde, explains Jan Bruér. Intermingling with, inter alia, rock and funk music led to styles such as jazz funk and jazz rock to see the light of day.
This creative explosion had several causes, Jan Bruér further argues. The 1970’s were characterized by an international perspective; the zeitgeist itself was cosmopolitan, which is highly noticeable in the music – hence, the box set’s subheading Jazz Cosmopolit.
– The Concert Sweden (Rikskonserter) organization had just been established a few years earlier, which created many new work venues for jazz groups. For instance, Iskra performed a lot school concerts around the country. The possibility of seeking and receiving scholarships also opened up for more jazz music being played.

Furthermore, several formal jazz educations and music programs were established, both at the music colleges and folk high schools like those in Ingesund and Bollnäs.
– Jazz summer courses created new contact spaces, and allowed young musicians to blossom. The long-term effect was all the new bands that formed out of this. The Music Forum movement spread across the country, which gave new performing opportunities. Music festivals like that on Gärdet in Stockholm wasn’t just for the progg bands, but were more limitless in their selections. Jazz shows on TV, like Christer Boustedt’s Jazz Idag topped the upwards trend for jazz music in Sweden.

Before even beginning to work on putting Svensk jazzhistoria vol. 11 together, Jan Bruér and Jörgen Adolfsson quickly ran into a big problem. They had to listen through an almost infinitely larger amount of recordings, in a shorter time, than on any of the previous ten volumes. This project required distilling the best tracks from 350 sessions (vinyl records, that is) with approximately 8-10 tracks per disc. How were they ever to sort this out?

– We have focused on styles that were new to the 1970’s. Groups that played regular bebop aren’t that interesting in this context. Nor are the many, often extraordinary big bands who played Basie-based music, says Jan Bruér. It’s actually quite a challenge to try to boil down all the great music produced in the 1970’s to four measly CDs. We’re talking about a veritable burst of records during this decade. Largely due to the newly instituted government grant kicking in. The Swedish Arts Council started handing out grants for making phonograms.

The big jazz labels during the 1970’s were Caprice Records (who, among other things, introduced their award/records series Jazz i Sverige), Dragon, Sonet, and Phontastic.
Just like the decade itself, Svensk jazzhistoria vol. 11 is characterized by multilateralism. Blends and fusions, in all directions, are represented, like the jazz rock by Janne Schaffer and Solar Plexus. Internationally renowned musicians based in Sweden, like Okay Temiz and Maffy Falay worked closely together with Swedish musicians and brought in influences from other countries and cultures. One great example is the first Jazz i Sverige award winning group, Sevda, who pioneered what would later become world music with their Turkish influences. Rena Rama is another, approaching both Indian and Balkan music. Per Henrik Wallin is an example of free jazz based on European models such as Peter Brötzmann and Alexander von Schlippenbach

– The discs are basically set up with a chronological order, which is why the music can suddenly shift violently in style. But we have snuck in longer pauses between the tracks than what the artists might have chosen for their own productions, all to enable the listener to full digest the unique aspects of each track and get ready for the next, says Jörgen Adolfsson.

In spite of the versatility of the decade, a handful of names to stand out from the rest: Egba, Rena Rama, Eje Thelin, Bobo Stenson, Palle Danielsson and Bernt Rosengren. A central figure is the saxophonist Lennart Åberg, who “has played with everybody”. Among others, he was a part of Rena Rama and Oriental Wind, a driving force in Radiojazzgruppen, the chairman of FSJ (The Association of Swedish Jazz Musicians), as well as producing teaching materials in cooperation with Gunnar Lindgren. And so on. In the book, he’s profoundly portrayed by Jan Bruér.

The picture is not as multifaceted when it comes to women’s role on the 1970s jazz stage. It mostly concerns vocalists, and primarily the stars Nannie Porres and Monica Zetterlund.

– The lack of female instrumentalists is glaring, säger Viveka Hellström. They do pop up towards the end of the decade, but were not recorded in the same measure as their male colleagues. Trumpet player Ann-Sofi Söderqvist, and the groups Tintomara and Mwendo Dawa headed by Susanna Lindeborg, make their entrance for instance. Attitudes change towards the end of the 70’s, but it doesn’t really bear fruit until the 80’s.

One female instrumentalist, composer and singer that stands out during the whole 1970’s is Monica Dominique, who led the transboundary band Solar Plexus. She’s portrayed by Viveka Hellström in the book.

Most of the selected tracks come from different contexts, different records, some picked up from Swedish Radio archives, and in many cases we’re dealing with material recorded live.

– The technical quality of the recordings do vary, says Jörgen Adolfsson. Some are amazingly well produced, while others are made in a spirit of “pre-punk-do-it-yourself”. The levels of musical performance differ as well, not to mention the aesthetic expressions.

In most cases, the master tapes have been available, but in few instances the team had to digitize the physical vinyl records.

– But regardless of its origin, sound engineer Claes Persson has worked through the material, and mastered it to a whole, säger Jörgen Adolfsson. The basic philosophy has always been to stay as close as possible to the original material..

All music the three of them have chosen made the cut to be included on the four CDs, however, so a new website with more material from the 1970’s Swedish jazz scene will be launched.

– We’ve had to refuse some tracks simply because they’re too long for this kind of medium, the CD. But as digital files, there’s no limit!.

So, what is most striking about Svensk jazzhistoria vol. 11?