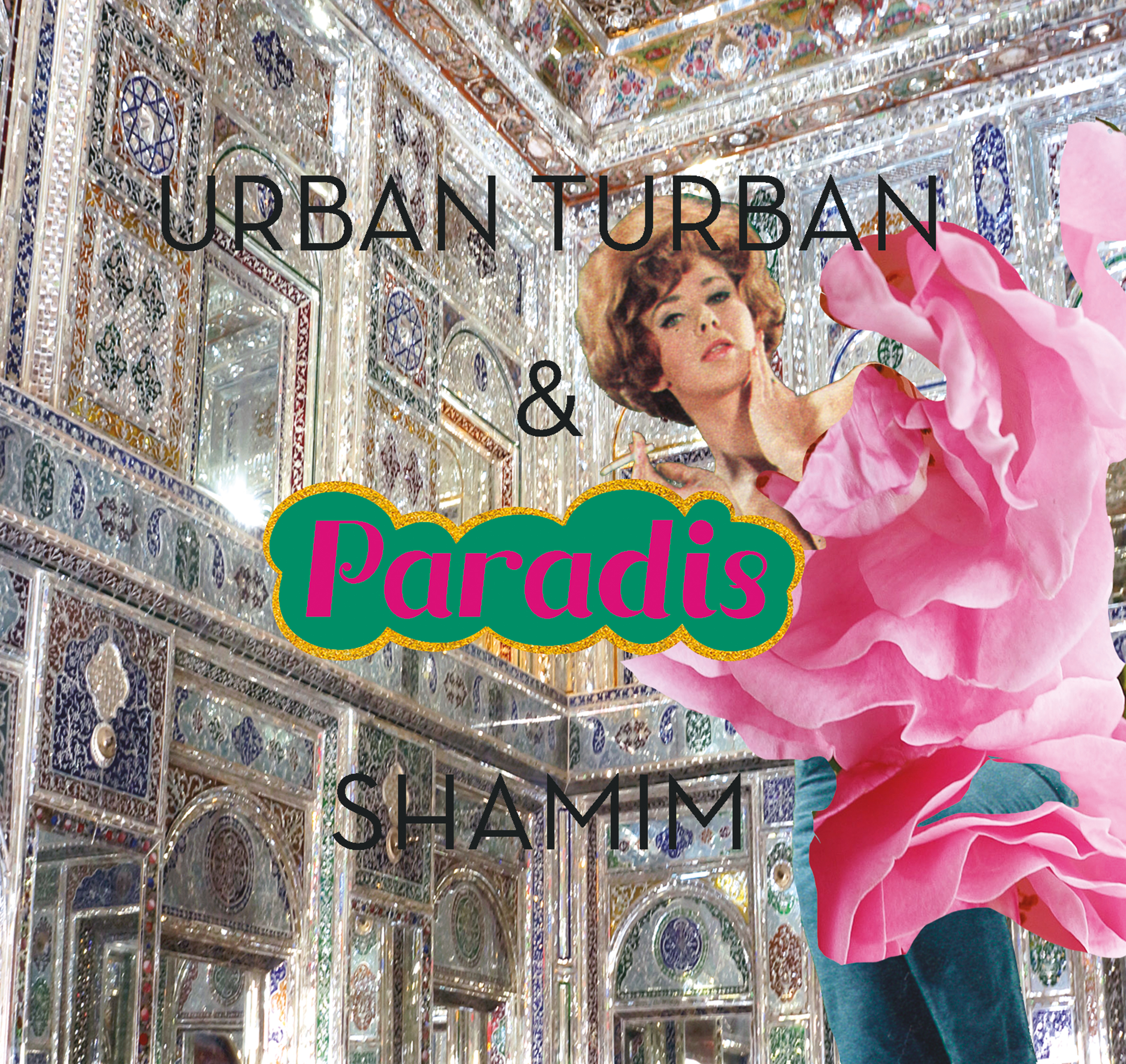 The word paradise floats in the mind like a shimmering balloon, and through its Persian origin signifies a utopian venue for all our dreams of a better life, beyond linguistic and cultural barriers.

Music is a language. Or rather, many languages at once, understood through confluence, and without the need for standardizing language classes and grammar. Urban Turban & Shamim Naghedi’s new album on the Caprice Records label can be likened to shredding a number of phrase books and stitching them back together in completely new configurations. Thirteen popular Swedish schlager hits, with Persian lyrics. Sånt är livet (You Can Have Her), Är det konstigt att man längtar bort nån gång (I’m Gonna Be a Country Girl Again) and Gråt inga tårar, as no one has heard them before. With new rhythms, and slightly modified melodies, played on unusual instruments. Unfamiliar – yes. Familiar – yes.

But why Swedish hits from the 1960’s, and why in Persian? The short answer on the second part of that question is pure playfulness and fate combined. “The lyrics could easily have been translated into any language”, says Peter Bryngelsson. Why it became Persian is a direct consequence of the meeting between the two Iranian singers Safoura Safavi and Shamim Naghedi, both of whom are also responsible for the translation of the lyrics.

The musical background is more complex. Born in the 1950’s, Peter Bryngelsson remembers the 1960’s schlagers from his upbringing in Vetlanda. Where songs like Sånt är livet or Lyckliga gatan (Il ragazzo della Via Gluck) echoed out of the bullhorn speakers at the local speedway track. Later, rock music took over.

The rock music led him to groups like Ragnarök, and later to Urban Turban, which, from day one, has been characterized by its zestful, boundless play with rhythm, melody and instrumentation. Also, the group’s music has been a way to erase musical hierarchies and dead certain borders – both between different kinds of music and people.

A commission for Urban Turban to perform two blues songs on the hurdy-gurdy at the World Exhibition in Seville in 1993 was particularly successful. Inspired by this, Peter Bryngelsson combed music stores for rare and odd instruments, with which to add flavor to blues and rock. There and then, he was “enchanted by the oriental instruments cumbuz, saz, and oud”. This enchantment led to collaborations with Turkish, Iraqi, and Persian musicians, with many ensuing cultural collisions: “Just counting in a song in steady common time could cause confusion!”

A parallel track for Urban Turban was an extensive collaboration with the great schlager singer of the 1960’s, Carli Tornehave. Yet another project was one in which the singers Claes Jansson, Louise Hoffsten, and Pelle Lindström performed Ray Charles songs accompanied by a Moroccan percussion ensemble. An overturning event was the tour in Palestine in 1998.
During this time, a new idea was born. Why not take this one step further? Why not translate some of the schlagers from the 1960’s and give them a completely new wardrobe? If nothing else, for the sake of challenging the notion of what is genuinely Swedish.

But halfway through the project, other matters interfered, and the recordings ended up at Svenskt Visarkiv (The Centre for Swedish Folk Music and Jazz Research), where they could easily have faded into obscurity. But in early 2016, Dan Lundberg, producer and chief librarian at the Swedish Performing Arts Agency, found the tape in the archives. And what he heard was not merely a shelf warmer, but a uniquely successful meeting between Swedish pop music and Persian sounds and lyrics, a shining example of curiosity and open-mindedness being two of the most important driving forces in art.
On this album there are thirteen songs, all of which are chosen for their transformative abilities. The rhythms are often bent eastwards, and the melodies slightly altered.

Right now, in 2017, the world is burning once again. Dark political forces are making their advances. Palmyra, Mosul, Aleppo, all turned to gravel. The migrant crisis is on-going. With all this at the back of the stage, the music on Paradis goes from musical playfulness to a serious questioning of the murky ideas of what is purely Swedish.
For Swedish-Iranian singer Shamim Naghedi, who “fled a life in hell”, music is a way to connect the Swedes with the refugees, to make different groups understand each other, and realize that the similarities are much greater than the differences.