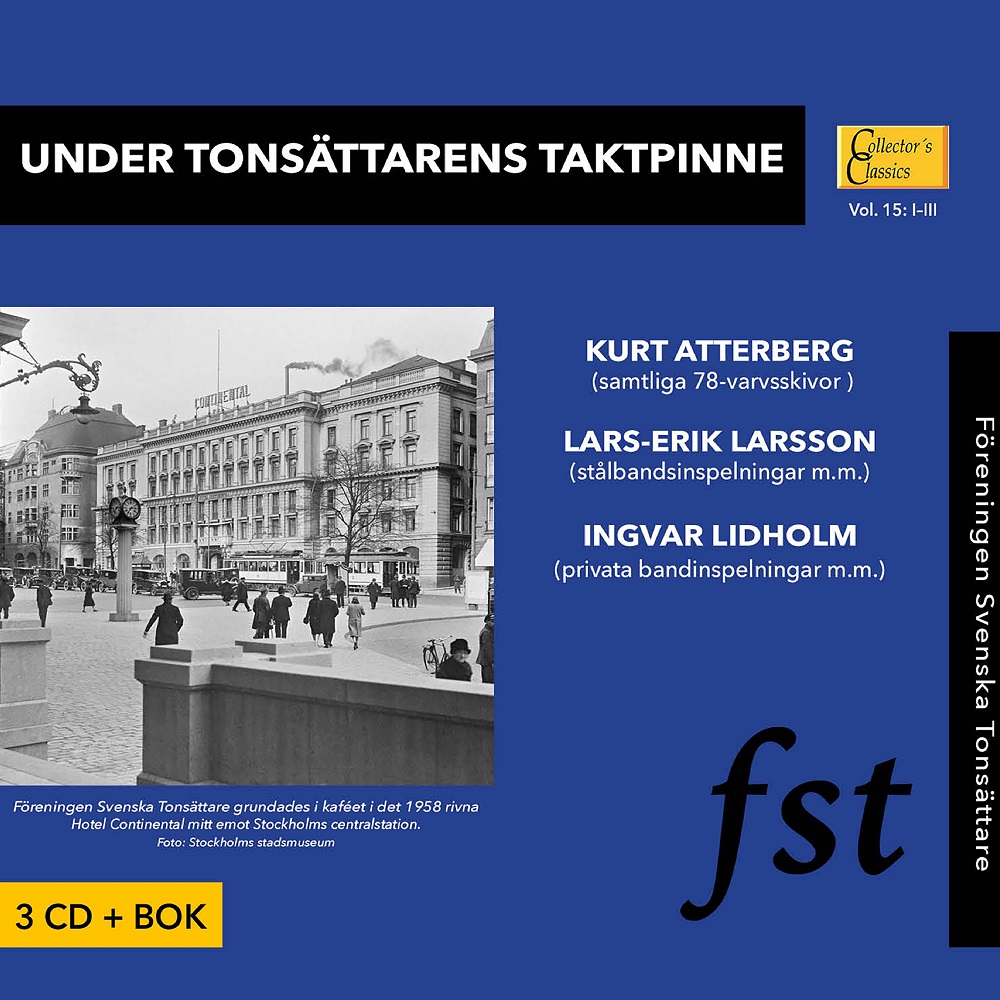 The 15th volume in Carl-Gunnar-Åhlén’s and Caprice Records’ Collector’s Classics series is released in connection with the 100-year anniversary of FST – The Swedish Society of Composers. On this triple CD box, we get to meet three prolific Swedish composers who all made groundbreaking contributions as conductors: Kurt Atterberg, Lars-Erik Larsson och Ingvar Lidholm.

One can imagine how the buyer of this volume of Collector’s Classics scratches their head after opening the package, and on the outside of the booklet and generously spread over the triptych-shaped CD holder, seeing only pictures of chairs and tables in an old-fashioned Viennese-style cafe. And starting to ponder, “What does this mean? The influence of Swedish fika on the art of music? The necessity of coffee? Without coffee – no musical life?” The explanation is less trivial, however. The three café interiors document the historical premises of the most important decision of Swedish musical life during the 20th century: the foundation of The Swedish Society of Composers (FST).

This event took place in the popular cafe on the Hotel Continental on Vasagatan in Stockholm, which was demolished forty years later and replaced by two consecutive new hotel buildings of the same name. After that Friday on November 29, 1918, when the association was founded, the public’s respect for the composer profession began to rise, albeit slowly at first. More important than raising the profession’s status was that FST managed to negotiate decent conditions for the composers, especially since new mass media such as the gramophone record and the nationwide Swedish Radio’s monopoly had been established. Thanks to these new media, some composers could even live handsomely off of their composing.

In this volume’s 66-page booklet, Carl-Gunnar Åhlén, supported by Kurt Atterberg’s chronicle in FST’s 25th anniversary publication from 1943, describes the circumstances surrounding the society’s foundation in the popular café. Before that, Swedish composers had been battling each other for opportunities as far back as anyone could remember. And no wonder, they all competed on a market that was, compared to today’s dimensions, exceedingly small. But, as by a magic spell on this evening, they shook each other’s hands, buried the hatches, and tied new friendships.

The fact that a society was established at all, owes much to Atterberg’s employment as an engineer at the patent office! Yes, you read that correctly. His rather special professional career, and his social rise and fall is described in detail in the booklet, as well as why he, like his colleagues Lars-Erik Larsson and Ingvar Lidholm, have been chosen as conductors of their own works on each of their CDs in the album. Atterberg claimed that a composer was preferable as an interpreter of his music, rather than a professional conductor. Thus, all three of these composers were enrolled in FST’s first recording project in 1948, also on Atterberg’s initiative.

Atterberg himself is represented by all of his commercial 78 rpm phonograph recordings, including the 6th symphony with the Berlin Philharmonic (and due to a technical mishap, the 2nd movement unfortunately ended up in the wrong place on the disc – for proper playback of the symphony on CD 1, play tracks 1-8-2 consecutively). This recording was made ten years after the foundation of FST.

Another ten years later, in October 1938, Radiotjänst’s then 30-year-old musical director and in-house composer Lars-Erik Larsson performed the poetic suite Dagens stunder (Moments of the Day), which begins “his” CD. The success of this suite was unprecedented, which soon led him to extract four of the program’s seven musical elements, creating the classic Pastoral Suite, Op. 19.

Ingvar Lidholm perhaps represents the Swedish Radio’s happiest time in the 1950s, when the medium was stronger than ever thanks to the interaction between the regional and national cultural policies.

In addition to the story of FST’s creation, the commentary in the record booklet also seeks to make a piece of little-known Swedish cultural history visible, focusing on the three selected composers’ respective activities as conductors.