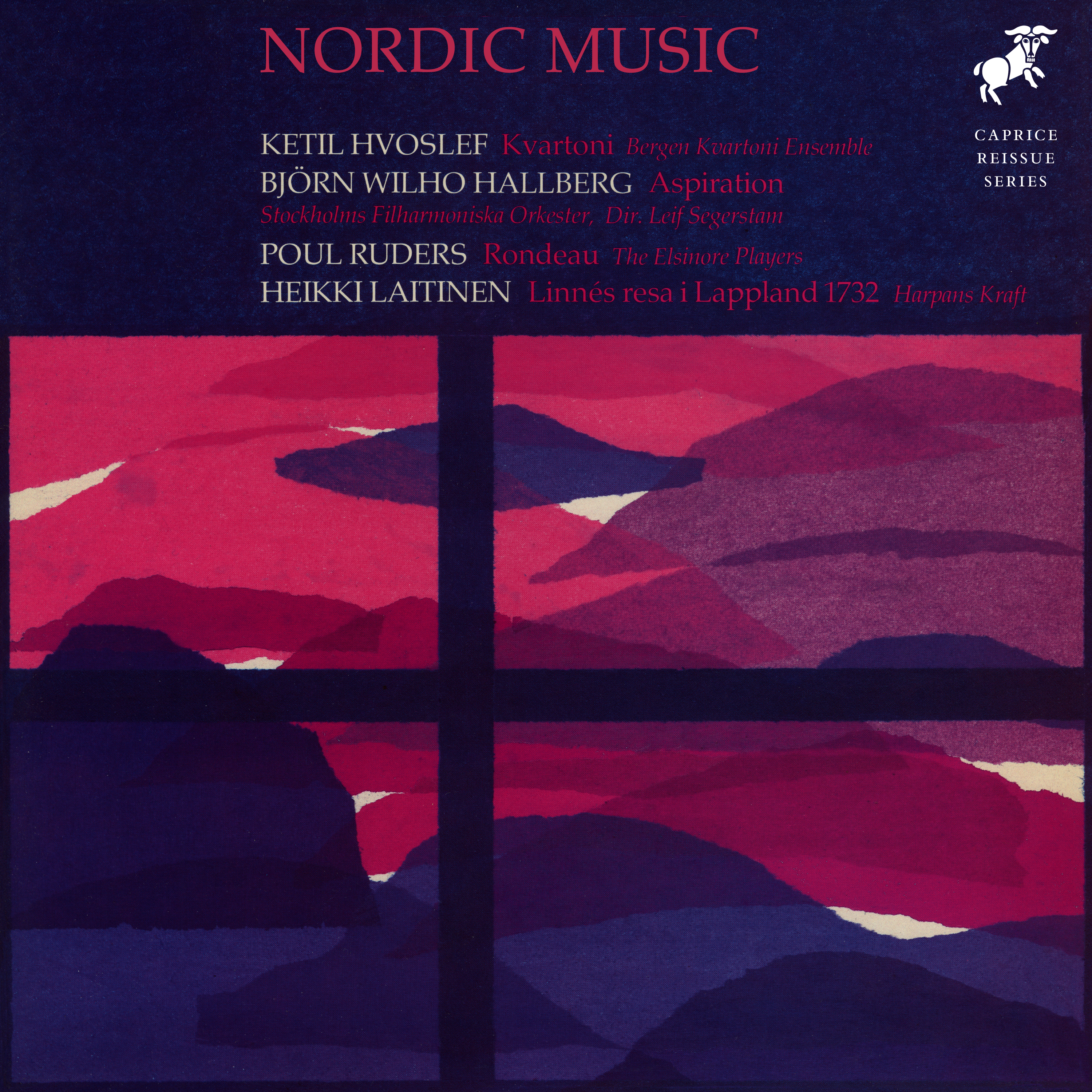 Nordic music – does it sound in any specific way? The answer is, of course, no. The five composers on this album, representing one Nordic country each, show that the range is endless. Their music is inspired by completely different subjects, like the human voice as an instrument, sounds as building blocks, medieval music, and Carl Linnaeus‘ mountain travels.

This collection was originally released in 1983, but this edition is called “extended version”, since the re-release has been expanded with Áskell Másson‘s piece Frum, a drum song. This is due to the original release lacking musical representation from Iceland. Frum comes originally from the album Percussion (CAP 21735) with percussionist Johan Bridger, recipient of the Royal Swedish Academy of Music award Solistpriset in 2004. The only thing the other four works have in common is that they were composed in the 1970’s.

Ketil Hvoslef (born 1939) is a Norwegian composer, who debuted in 1964 with his Concertino for piano and orchestra. Among other things, he’s known for his String Quartet no. 2, where the first violinist plays the Norwegian folk instrument Harding fiddle. Aside from numerous orchestral and chamber music, Hvoslef has composed frequently for theatre, film and TV productions. He has described his starting point in the compositional work as “openness in all directions”.
The work Kvartoni from 1974 was a commission from Concert Norway and the Grieg Academy in Bergen, and was written specifically for the performers on this album.

Swedish-Norwegian composer Björn Wilho Hallberg (1938-2009) was originally trained in the modernist and avant-garde schools, but eventually searched for inspirations in completely different venues – like the music of late romanticist and master of timbre, Richard Strauss. This is highly evident in the work Aspiration per orchestra from 1971, which was the start of Hallberg’s compositional formation, strongly affected by the Cuban missile crisis, the Kennedy murders, and disappointment in the political radicalisation of art and music in the 1960’s.
Aspiration was a commission by Concert Sweden, and what premiered at the Music Week in Östersund, to much acclaim.

Poul Ruders (born 1949) is a Danish composer and organist, known for his tremendously varied tone language and productive career. Among his best known works are the operas The Handmaid’s Tale (based on Margaret Atwood‘s famous novel) and Selma Ježková from 2007 (based on the film Dancer in the Dark by Lars von Trier), the bombastic orchestral work Manhattan Abstraction from 1982, and his baroque-inspired Violin Concerto no. 1 from 1981.
Ruder has called his genre “association pastiche”, his compositions often alluding to music of previous eras. As such, he’s used medieval tunes for works like Medieval Variations from 1974, and in Rondeau from 1976, which Ruder describes as “a tense, grim paraphrase over a prosaic French medieval rondo, Prendes i garde, a ballad that challenges men to ‘be wary of the women, especially the brunettes'”. Another great inspiration and influence of Ruder’s later music is Brazilian and Cuban folk music.

Finnish composer and folk music researcher Heikki Laitinen (born 1943) has composed several instrumental works and hundreds of songs and ballads. An acoustic tape composition based on ten authentic joiks (Sami songs) created a lot of buzz at the Nordic Music Days in Oslo, and has also been broadcasted on Swedish radio. It was after hearing this work that the ensemble Harpans Kraft commissioned the work on this album.
Linnaeus’ Expedition to Lapland 1732 is quite the adventure, even today. The young scientist, filled to the brim with both humility and self-assertion, taking in both details and the wonder of the “vastness of nature”, is caught in hardships most of which can hardly be imagined by a contemporary mountain tourist. Linnaeus makes notes in his inimitable factual prose, but is sometimes overwhelmed by indignation when he sees how the native population are abused by the Swedish authorities. In its uniformity, still containing the most breath-taking emotional turmoil, Linnaeus’ Lapland travels is also a great linguistic adventure.
From this treasure, Laitinen has chosen a few short excerpts representing different emotional states in the famous observer. He combines them with gently composed settings in a modern tone language, where both the drums’ suggestive chugging and the willow flutes’ whirring gives the music a timeless cast.

The Icelandic percussionist and composer Áskell Másson (born 1953) is close to self-taught. He has composed a number of widely appreciated works where he developed a music of ethereal sounds, expressive character and intensity. Among his most works are the opera The Ice Castle, three ballets, Sinfonia Trilogia and other orchestral works, chamber music, choral and church music, music for film, theatre and TV. He has also composed several solo concertos for clarinet, viola, piano, trombone, marimba, and snare drum, the latter also being the instrument of choice in the solo piece Prim.
Frum was finished in 1995, the name meaning “embryo”. Másson explains, “the embryo to this composition consists of two beats, from which the whole piece emanates. There’s plenty of polyrhythm, and in the end there are five different rhythms going on at the same time.” Frum was written for internationally acclaimed percussionist Evelyn Glennie.