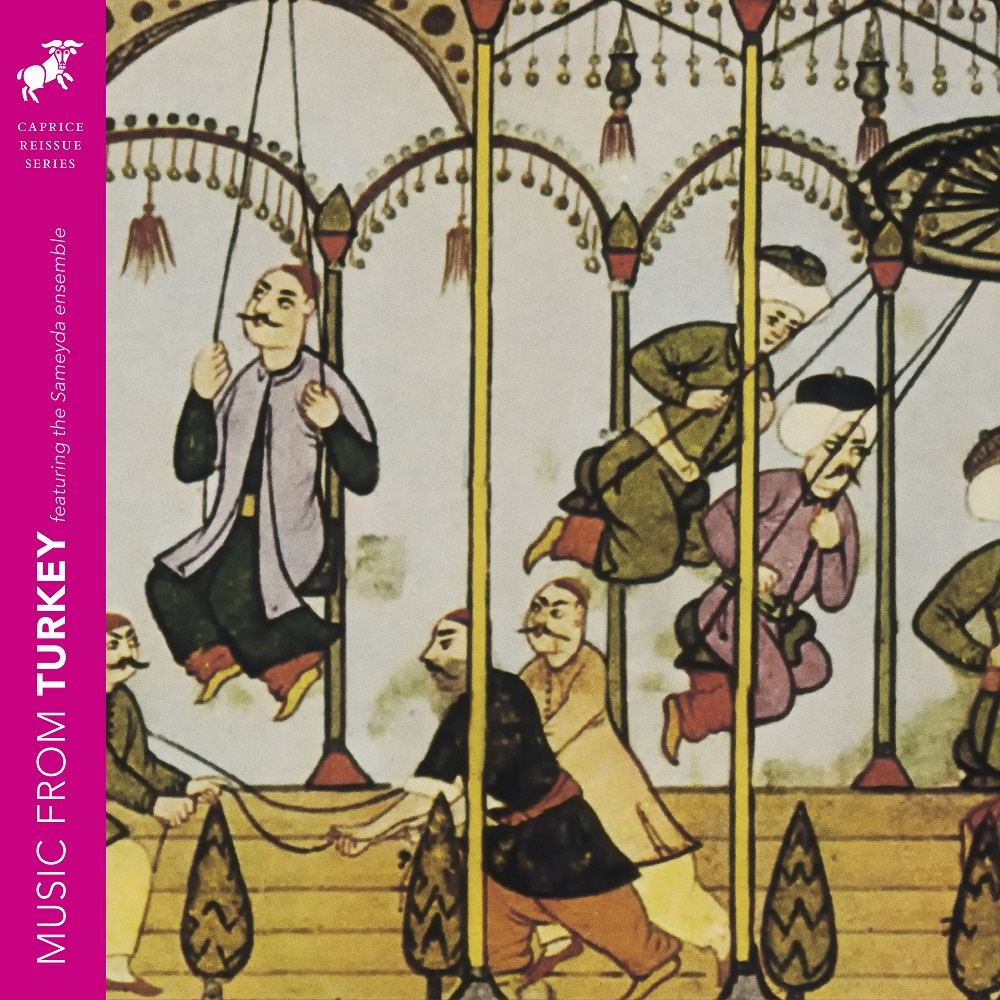 As part of Caprice Records’ Music from series, we reissue the album originally titles Turkisk musik (CAP 1087), for the first time on CD & digital format. Turkisk musik was recorded in 1973 by the legendary music ethnologist and record producer Deben Bhattacharya.

Music from Turkey provides a synoptic presentation of Turkish music. One can find the traditional music — both folk and classical music — but also popular music influenced by Western, Indian and North African culture. Just like the original release and all other volumes in the series, the music is enriched by a comprehensive booklet with writings by Krister Malm (1973), Dan Lundberg, Viveka Hellström and Fikret Çeşmeli (2016). The booklet covers many topics, from the relation between the Islamic religion and music, urban and rural, folk- and art music. We learn about the typical Turkish instruments and about the many different types of music they create. The booklet also provides in-depth descriptions of each of the 23 tracks on the album. In addition to the Turkisk musik album, Music from Turkey also contains the complete material from another album with the Turkish music group Sameyda (originally released on the Origo label), which was mostly active in Sweden in the 1980’s. Thanks to the producer and recording technician Tomas Gabrielsson, we have been given the opportunity to include this fantastic material.

The Ottoman Empire expanded from the 14th century onward by the Ottomans, a Turkish dynasty with roots in Central Asia. Up until the First World War, this realm was one of the great powers. Following its collapse after the war’s completion, modern Turkey was one of the emerging new nations filling the void.

The Ottoman Empire contained many ethnic groups and religions, but the dominating faith was Islam, and much of society revolved around Islam and its tenets. Unlike in Europe, there was no difference made between the sacred and secular powers, as in state — church, nobility — priests, etc. The regent, the sultan, held both political and religious authority. When the modern Turkish republic was established in 1923, the paragraph in the constitution that decreed Islam to be the official religion of the realm was stricken, but of course, doing so didn’t erase centuries old cultural patterns. Islamic lifestyles still dominate the Turkish countryside, which encompasses around 2/3 of the country’s population, while being diminished and mixed up with other influences in the urban areas.

Several Islamic movements have a restrictive position regarding non-religious musical performances. Music is seen as a powerful method of influence, that should be solely in service of the religious message. Thus, many forms of music were condemned by conservative Islamic leaders. The Ezan (أَذَان or Adhan in Arabic), the Islamic call to prayer, and reciting the Quran, was generally not considered music, and thus remained. This position led to much musical creativity being invested in the Ezan and Quranic recitation, allowing it to evolve into intricate musical forms within the boundaries of religion and practical function. When Islam spread over the Anatolian peninsula there were already a plethora of musical traditions active in the area, partly affiliated with different religions. While music and dance were forbidden by many Islamic rulers, Islam itself could not replace their social function for both individuals and groups. Traditional art and folk music continued to co-exist with the new religion.

The Turkish 20th century was characterised by an increasing influence from Europe, and eventually also the USA, in all areas of society. In the field of music, this development began already in the 1820’s, when the Italian musician Giuseppe Donizetti (1788–1856, the older brother of famous opera composer Gaetano Donizetti) was recruited to serve as Instructor General at the imperial court music school of the sultans and dervishes in Constantinople. When the Turkish republic was founded, and Kemal Atatürk rose to power in the 1920’s, the “Europeanisation” of musical life in Turkey began with rapid development. European-style operas and symphony orchestras were founded in major cities, and musicians and composers with a European education were promoted. A music conservatory was established in Ankara, where, among others, German composer Paul Hindemith taught and led the organisation of its education. All teachers were trained in European music, and the teaching of traditional Turkish music all but vanished from schools, where German songs were now sung with Turkish lyrics. Starting in the 1970’s, this has changed however, and today the schools’ musical curriculum contains both Turkish and international repertoire.

The singer Sevinç Uygur founded the group and was its natural leader. She also gathered the band’s entire repertoire, mostly from the Turkish Radio’s folk music orchestra, a kind of modern versions of traditional folk songs, with strong melodies and rhythms. Many of the lyrics are quite jovial in character, built on rhymes and jingles with love as the main theme. The group’s name is a compound of syllables from the names of various traditional instruments used by Sameyda: the string instrument saz, wind instrument mey and large drum davul. The band members all play several instruments each.
Sameyda consisted of six exceptional Turkish musicians, all residing in Sweden at the time the album Düğün Kına Ve Ask Türküleri was released in 1985.